There is a very special atmosphere in this small hotel, known on the island as the “Hotelito”, not only for its extraordinarily unique position but also for the long history of this place out of the world. 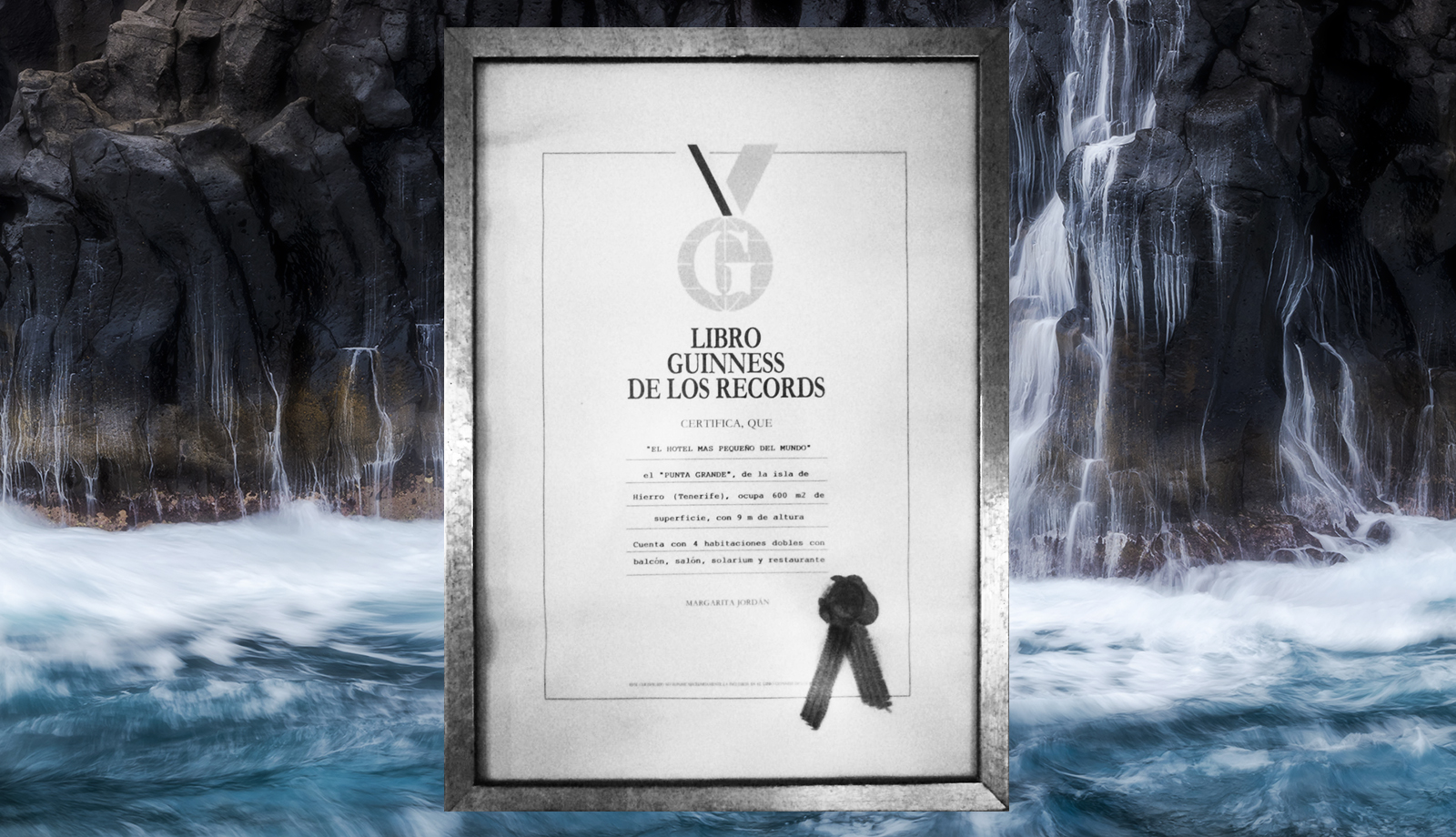 In 1984 the hotel was registered in the Guinness Book of World Records as the world’s smallest hotel, a further recognition that Puntagrande is a unique and special hotel that cannot be found anywhere else on Earth!

Every stone, every corner of the hotel, every decoration on the walls, tells a story of sea adventures and intrepid travelers.

The building dates back to 1830, a room of just 40 m2 built on a tongue of lava rock which juts fearlessly into the Atlantic, lulled by the mistral wind.
Later a second floor was built and soon that building became the center of the valley trade, used to store wine, fruit and other products that were then exported all over the world, including the water of the Pozo de la Salud, a source of mineral-medicinal waters to which curative properties have been attributed since the nineteenth century.
At the beginning of the 20th century the area experienced a period of great commercial growth and on the pier a tower crane was placed that facilitated the loading and unloading of the cargo ships.
The specific characteristics of the building, its position like an oasis of beauty and peace in the middle of the sea, soon converted the property into a lodging house for tourists and travelers.
In 1948, Francisco Padrón Villarreal fell in love with this place and bought the property of the house, but a real interest in its management for tourism began only years later, in 1969, initially as a restaurant and bar.

An integral part of the natural beauty all around.

In November 1975 the building, under conditions of decline, was restored by the architect José Luis Jiménez Saavedra, which made sure to minimize the environmental impact of the hotel and took the necessary measures to ensure the safety of the building even during storms.
The architect Jiménez Saavedra took great care to design the hotel integrating it into the surrounding landscape, using many elements from the local natural environment, such as the noble woods we can find in various parts of the building or the lava stones that make up its walls.
The internal staircase was designed by the Canarian artist Néstor de la Torre and its columns were recovered from the demolition of the old town of Telde. A large beech root hangs from the ceiling and a root of Sabina decorates a wall.
The interior of the hotel is a true hymn to the sea, full of traditional objects of the naval history of the island. Thanks to all this, Puntagrande Hotel has been recognized as a museum and a place of cultural interest.
In 1984 the hotel entered the World’s Guinness Records as the World’s smallest hotel. In the same year the Ministry of Information and Tourism assigned to the Punta Grande restaurant the bronze plate for Tourism Excellence, and in 1991 the Canary Government conferred at the hotel the silver medal of “Importance for Turism”.
As stated by the President of the El Hierro Cabildo, Alpidio Armas, the island’s history is strictly interconnected with this small hotel, which has become an emblem of the island.
In 2019 the Hotel Puntagrande has been declared by the Canary Islands Government “Bien de Interés Cultural” (BIC), a site of cultural interest, in the category of Ethnological Site. 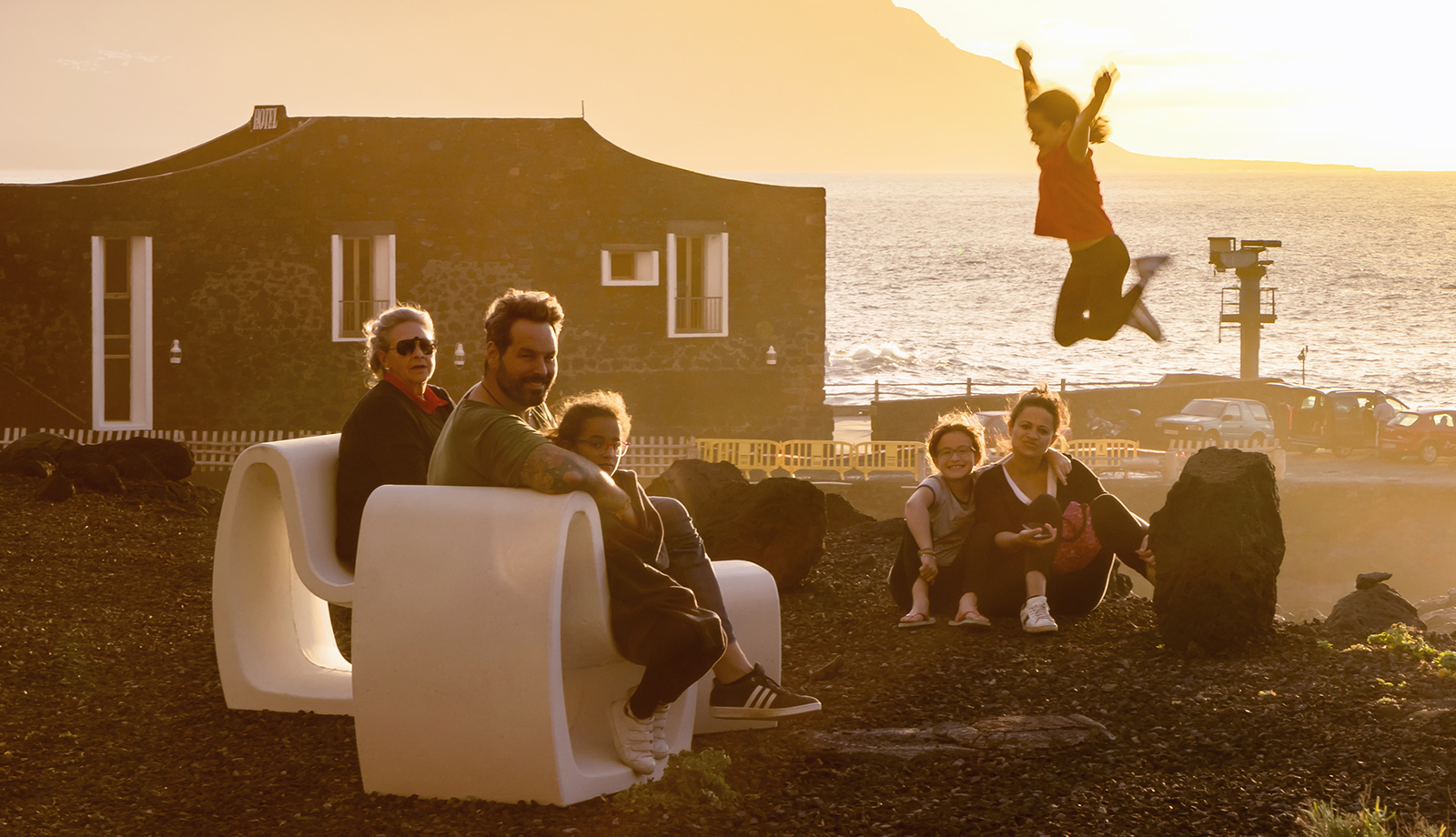 In 2018 the Hotel Puntagrande was bought by David Nahmias and his wife Paula, who with their 3 girls Marta, Sophie and Noa moved from Italy to Tenerife a few years ago. As they saw the small Hotelito of El Hierro they fell in love with it and decided to move on this island to start this new adventure and a new life.
With a lot of enthusiasm, energy and courage, they have brought a breath of fresh air to the Puntagrande Hotel and they are ready to welcome with a smile all the guests who arrive at this small hotel.

A chat with the people who managed the Puntagrande hotel for many years, taking care of every aspect with the love and dedication that they reserve for their home.

Gemma is an Italian woman with a strong and sunny character, who arrived on the island in 1964 to visit it and fell in love with it so much that a few months later she returned and moved there permanently. In 1979 she took the management of the Puntagrande Hotel.

Why did you choose to live in El Hierro?
When I came back to Italy, after seeing the Canaries and this island in particular, I had the “fever de El Hierro”, feeling homesick for the entire island. I came back, here in Las Puntas there was not even a proper road, but the wonders of this island had conquered me. It’s the effect it does, I’ve never seen a sky with so many stars.
Sometimes when the sun sets, you see a particular ray of sunshine on the water, called the “green ray”, it is a rare event and those lucky enough to see it remain enchanted.
What was managing the hotel like?
A lot of work and a lot of satisfaction. Customers arrived on the ship even at 3 am, while fishermen usually returned at 5 am with bags full of lobsters.
How do you sleep in the middle of the ocean?
Everybody has always slept very well here, because the waves of the sea do not bother you, they cradle you like a baby.

We use cookies to ensure that we give you the best experience on our website. If you continue to use this site we will assume that you are happy with it.OkRead more